His yearbook profile calls him “Smiley”, and Jim Hancock was voted “Busiest” boy in his class. Jim earned nine letters in Track, Cross-Country, Skiing, and Cheerleading.

As a freshman at Southwest he started his running career by setting a 1-mile record of 4:54 in the 1946 City Sophomore Track Meet. Jim was a key member of the State Championship C.C. teams of 1946, 1947, and 1948. As Captain of the 1948 Cross-Country team, he led them to both City and State Championships. Jim was 1948 individual champion, setting both city and state records on the Lake Nokomis 1.8-mile course. During the 1948 state meet, Jim set a record of 9:01.7 which stood for 10 years.

During his Jr. and Sr. years, Jim competed in Nordic Skiing, becoming City Champion and placing 3rd in the 1949 state ski meet in Duluth. A severe skiing injury the following week slowed him down, but Jim recovered well enough to place 5th that spring in the mile at the State Track Meet. Jim was also Cheerleading Captain, and participated in football and swimming. 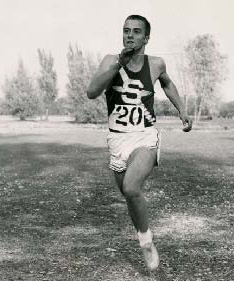 In addition to his activity in sports at Southwest, Jim was Vice President of the All-City Student Council, President of the Southwest Choir, President of the S-Club, an Eagle Scout, Assistant Scoutmaster, and was a certified Red Cross WSI swimming teacher. Following graduation from Southwest in 1949, Hancock continued his education and running career at the University of Minnesota. Jim earned varsity letters in Cross-Country in 1950, 1951, and 1952, and was named Captain in 1951. He earned a varsity letter in Track in 1951. Being the active guy he is, Jim also participated in whatever intramural sport was in season.

After receiving a degree in Education, Jim had a long and successful career in Non-Profits, Corporate