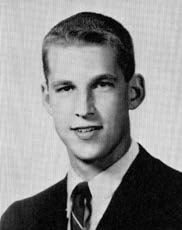 As a senior graduating from Southwest High, it appeared that his collegiate athletic future would be in basketball since he was the Minneapolis conference leading scorer and MVP. Coach Art Fredrickson believed that he had the potential to be a success in the right college football program and told the coach at the University of North Dakota so. Corey proved him right.

Freshman weren’t eligible for varsity competition, so Corey had to wait until his sophomore year to take over the UND offense. He lead the team to a record of 25 wins and 4 losses during the next three years and two North Central Conference Championships. He also lead his teams into the first two bowl games in the school’s history. In the ‘65-‘65 season, he was named the All Conference quarterback, North Central Conference MVP and MVP of the Pecan Bowl. By the end of his career, he was in the UND record book in every passing category including over 4500 yards on 312 completions for 36 touchdowns. Corey was honored as a member of the UND Hall of Fame and the 1894-1994 All-Century team. His jersey was retired.

After playing for the North team in the post-season, 1967 Senior Bowl, Corey entered the National Football League draft. He was drafted in the 7th round by the Atlanta Falcons. He moved to the Canadian Football league after the 1968 season and played for the Edmonton Eskimos. His trading card is still available for sale on line. In 1969 with Edmonton, Corey passed for over 2000 yards and nine touchdowns. After his professional career, he returned to UND’s coaching staff for one year. Corey is retired from investment advising and lives in Littleton, Colorado with his wife, Joyce. They have a son, Doug, and a daughter, Jane.