Tim was a 3 year letter winner and 2 time All-City in both basketball and baseball at Southwest. He was a captain in both sports his senior year. His 1976 baseball team won the city conference title.

Tim is considered by many to be among the very best boys basketball players ever to lace up their sneakers for the Purple and White. His performance on the basketball court for SW approaches legendary status. Tim was a high-flying 6’4 guard who could drive and shoot with the best! In addition to his all conference awards, Tim was named to both the WCCO and Mpls Tribune All-State teams. He was also one of five finalists for the 1977 Mr. Basketball Award. He ranks in the top ten all time leading scorers for boys basketball at SW, and his 467 points in the 1977 season (in only 17 games, for a 27 ppg average), still ranks among the top season scoring performances at Southwest in boys basketball. Tim wasn’t just a scorer - he was known as a great teammate, and his athletic tenacity on the defensive end gave opposing stars fits.

After high school, Tim was a star basketball player at Mankato State University (now Minnesota State, Mankato). There, he was a 4 year letter winner, was a member of the NIC Conference champs in 1979, was the team’s leading scorer in the 79-80 and 80-81. He led the conference in scoring his senior year and still ranks seventh all-time in scoring for Mankato. He was both team MVP and Captain his senior year. Tim was named NIC All-Conference twice and was named NAIA District 13 First Team All-American.

He went on to play basketball internationally in Germany and Holland. Tim currently lives in Lakeville. He is married to Kaye and has four children, Lindsey, Nicole, Alexis and Tyler. Tim is a Senior Marketing Representative for Enterprise Products, having been with the company since 1991. He has coached many youth baseball and basketball teams in the Lakeville area over the last 28 years. 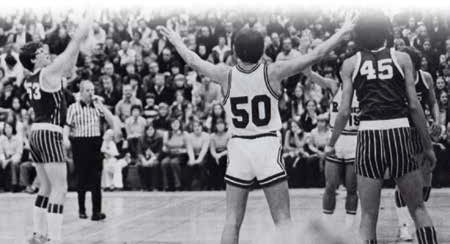