When you think of the wonderful long history of Southwest athletics, the sports that comes to mind first are cross country, hockey, track, plus a splash of football and a dash of basketball. However, back in the late forties tennis took center court at Southwest as Jack Thommen, and his partner Edmund Gould,won the 1946 Minnesota State Doubles Tennis Championship. They were the first and only State doubles champions out of Southwest. In that same year, Jack made it to the semifinals in State tennis singles but was beaten. An interesting sidelight, his doubles partner Edmund Gould went on to win Southwest's only State tennis singles championship in 1948. Not that Jack was one sport wonder, as he also ran cross country and track, and played basketball for a total of twelve letters. But, it was tennis that was his first love. Interestingly one of the people that piqued Jack's interest in tennis was none other than the great Bobby Riggs, who spent some time in Minneapolis teaching tennis skills. 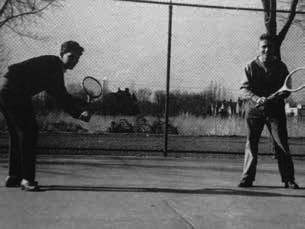 After high school, Jack played tennis for Gustavus Adolphus and the University of Minnesota where he served as the Gopher captain. He completed his bachelors degree and masters degree in education at the U of M. Jack was one of the founders of the Urban Inner City Tennis Program and continued to play competitive tennis in the Midwest during the 1950's and 1960's. He was a 30 year Minneapolis school employee as both a teacher and administrator. Jack has been inducted into the U.S. Tennis Hall of Fame Northern Section and the Gustavus Adolphus Athletic Hall of Fame. Jack passed away in October,2008. He is represented at the Hall of Fame induction by his son Wade and his daughter Becky Nye.