The most decorated male swimmer Minneapolis Southwest has ever produced, Herb Schoening ('75) was a natural-born talent with a special gift for freestyle. In his four years as a letter winner Herb built up an impressive collection of records that stood the test of time, the last one falling the year after the pool walls themselves came crumbling down during the 2011 reconstruction. His 200 and 500 freestyle times eluded swimmers at the Southwest pool for 37 years – talk about chasing the white whale! During his junior year, Herb reached the pinnacle of his high school career, clinching the individual state title in the 500 free while setting the state record. He placed 7th in state in the 200 free, and with the Schoening brothers at the helm, Southwest achieved its highest ever team State Tournament finish, placing 9th overall. As the Southwest captain his senior year, he went on to State again, this time placing second in the 500 free and third in the 200 free. His dynamic presence at the pool and in the hallways won him the coveted title of 'Friendliest' in the highly contested '75 senior superlative voting. Forty years later, he remains the most recent Southwest Boys Swimming State Champion. 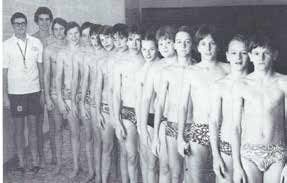 In 1975 Schoening joined the University of Minnesota team as a scholarship athlete, immediately making his mark as he set freshman records in the 100 freestyle, 200 freestyle, 500 freestyle, 1650 freestyle and the 200 individual medley (IM). His talents as an all-around swimmer earned him recognition as U of M Athlete of the Year in swimming his freshman year. An academic as well as an athlete, Herb was a two-time Williams Scholar ('77 and '78) while pursuing a Bachelor of Science degree majoring in Interior Design.

Since graduating in 1980, Herb has led a fulfilling and successful career as an interior designer and currently lives in Austin, Texas with his partner Bryan and their two beagles, Mercury and Mars.