As Southwest High School became more prominent on both the Minneapolis and Minnesota sports scene in the late forties and early fifties, a number of key athletes stepped up. With a student population of less than 100 per class, each athlete was asked to play multiple roles across multiple sports. One of those great all-around athletes was Clint Andrus. Clint played three sports at Southwest but showed his true versatility on the track and field team, as he was a high jumper plus threw the discus and shot put. An unusual combination. As a junior, Clint paced second in the shot put in the State Track and Field meet and the Indians finished second in the State. His senior year Clint finished fourth in the shot put as the team finished third. 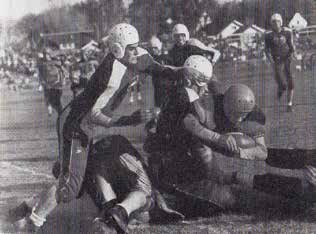 Clint is probably most remembered for his football success. As captain of the 1950 Southwest team under Coach Jerry Sullivan, Clint was selected as the Minneapolis Conference MVP as well as being an All-City tackle. He was on the field for the entire game as he played offense, defense, called all the signals plus handled the kicking duties. Clint went on to play for the University of Minnesota Gopher football teams in 1952,1953, and 1954. He felt his biggest victory was a 22-0 shutout of Michigan to recapture the Little Brown Jug.

Basketball was Clint's winter sport. He was a stalwart center who made the All City team his senior year and was one of four team members in the "Six Foot Two and Over Club".

After playing one year of professional football for the Philadelphia Eagles, he turned down an offer to play rugby in Winnipeg and married his high school sweetheart, Margaret. Clint served in the US Army but eventually made his way back to the Twin Cities where he was the owner of Skyway News and Finance and Commerce. Clint passed away in 2009 but is survived by Margaret and his four children Cindy, Teri, Lori, and Clint.