Great math teacher who also coached could be the headline for Bob Hoisington but he may be best known as an award-winning coach of track and cross country at Minneapolis Central and Southwest.

Bob was born in Sioux City, Iowa, one of three boys raised by their mother after the early passing of his father. He credits her for his strong work ethic.

While earning his degree in mathematics and education at Macalester College, he lettered in track and cross county and led the Scots to three MIAC Championships. Macalester has honored him with induction into its Hall of Fame. His teaching career began at Windom, MN where he met his wife, Jean. She was teaching kindergarten and he was teaching math and coaching. He was drafted to serve in the U.S. Army teaching Math Applications at Aberdeen Proving Grounds. He returned to college to earn his Masters in Education at the U of MN. Bob and Jean were married in Brooklyn, NY in 1952. Bob began a thirty-year career teaching and coaching at Central and Southwest. Before coming to Southwest, Bob coached Central High track teams to State Championships in 1959, 1960 and 1964.

During that career, he had seven high school teams and 36 individuals win state championships in track and cross country. He has been named coach of the year in Minneapolis seven times and in Minnesota five times. 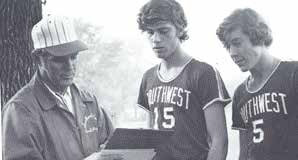 Since retiring in 1983, Bob has remained active on the State High School League's games committee and as a head rules interpreter. He is sought after as a meet referee and starter.

He and his wife, Jean, have a son and three daughters, 21 grandchildren and 6 great grandchildren. Sadly, Jean passed away in June of 2013. Bob continues to reside in Shoreview,