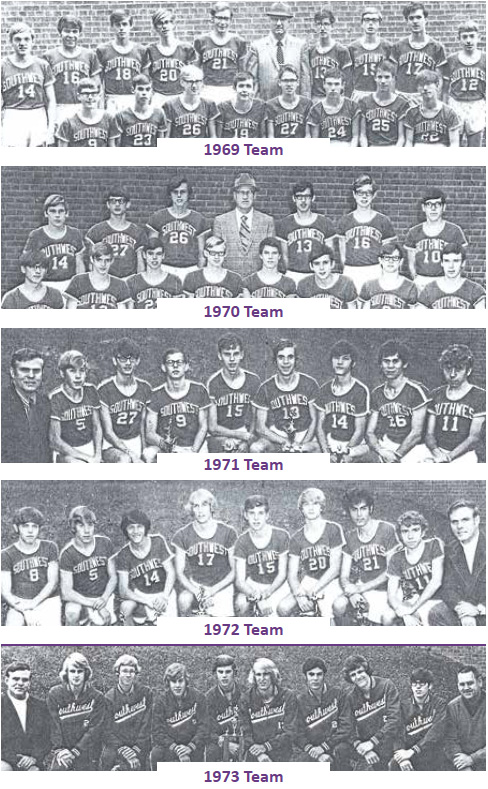 In a sports world obsessed with dynasties, a “three-peat” is such a big deal that the term has been copyrighted. At Southwest High School in Cross Country during the early '70's a three-peat meant they were just getting started.

This program, which won the State Championship 14 of the first 28 times the meet was held and which could nearly be given the Swain Invitational trophy before the race was run, set a standard which may never be equaled.

Coming off a second place finish at State in 1968, the returning runners dedicated themselves to settling for nothing less than the Championship the next year. Coach Al Halley, Captains Jon Drew and Brad Richards set their sights high. Hard work, determinations and loads of training miles paid off as the teams first five finishers crossed the line within 15 seconds of each other.

The 1970 team again coached by Al Halley and captained by Brad Richards set the tone for their run at a second State Championship by posting a perfect score in the City Meet. The team, featuring many veterans, accomplished their goal and earned the school the title of “cross country capital of Minnesota” At the end of the year Coach Halley announced that he would not be back for another season, but an experienced coach, Bob Hoisington, who had patiently awaited his chance was ready.

The 1971 team with only two returning letterman was not expected to make much noise. Coach Hoisington and Captain Tom Pearson had other plans. Plans which could only become reality through hard work and the development of the “new guys” who come off a talented JV squad. Captain Pearson showed his leadership by setting a new school record of 14:58.8. His teammates responded by winning the City meet again with a perfect score, the Swain Invitational and the State Championship.

Coach Hoisington was taking nothing for granted in 1972. He knew the path to another State Championship was paved with untold 440's, two-a-day practices and 1000 mile club memberships. Captain John Zahr , who broke the city record, provided the leadership for juniors Dick Nelson, Bob Mayo, Scott, Johnson and Jim Lieb. The team had nearly perfect scores against every other city team and won three Invitational meets, including the Swain.

The 1973 team with its returning veterans was arguably the finest high school team in the nation. Captain Bob Mayo lead a team that was known for winning and humility. As in the previous year, no city team was a threat and they won the three big Invitational meets decisively. They went on to win the State Championship with a score of only 48 points. Never before and probably never again will there be a program that will claim